US Senate Hearing Recap on Stablecoins

A review of the recent Senate hearing “Stablecoins: How Do They Work, How Are They Used, and What Are Their Risks?”

Stablecoins differ from other cryptocurrencies because their value is linked to government-issued currency or “stable” assets (which can included cash, bonds, gold, or any number of assets even other cryptocurrencies.) Because of this link, stablecoins are generally considered to be less volatile in market fluctuations than other forms of cryptocurrency. However, since fiat-backed stablecoins share so many characteristics as traditional forms of currency, the question arises as to whether stablecoins should be regulated just as existing forms of fiat-based money.

This was the key topic of discussion before the Senate Banking Committee at which a panel of legal experts presented testimony on the whether or not stablecoins should be regulated. The lively set of witnesses before the committee, had divergent opinions on this matter. Witnesses included:

As the adoption of cryptocurrencies becomes mainstream, the issue of how cryptocurrencies should be regulated continues on many regulatory fronts. There are also concerns about who plays the key roles necessary to supporting stablecoin activities, such as issuance and governance.

A key theme remains a lingering concern over big tech companies pursuing a leading role in stablecoin offerings (e.g, Facebook, Amazon). While Facebook’s Libra/Diem project has lost steam over the past year, policymakers remain focused on potential risks of allowing tech giants to become too big to fail in the realm of financial and payment services, and its effects on financial stability, competition and market power and, consumer protection. For example, Professor Allen raised the point that the “biggest financial stability risk” may well be the involvement of tech companies in stablecoin offerings.

“We do potentially have both monetary policy and financial stability issues, in the sense that the tech company would become too big to fail and essentially part of the government safety net. So, unless one of those tech companies moves into this space, although I do not see stablecoins becoming used for everyday goods and service payments absent of some kind of government support in the form of Deposit Insurance or the equivalent.”

—Professor Hilary Allen in her testimony to the Senate Banking, Housing, and Urban Affairs Committee.

According to Professor Hilary Allen, “Policy options range from an outright ban on stablecoins, through a licensing regime for stablecoins, to a multi-faceted approach that uses aspects of securities law, antitrust, financial stability regulation, and banking law to respond to stablecoins’ risks.”

As of Oct. 2021, “stablecoins issued by the largest stablecoin issuers exceeded $127 billion” a growth of over 500% from the previous year according to the President’s Working Group (PWG) stablecoin report based on research from Coin Metrics. 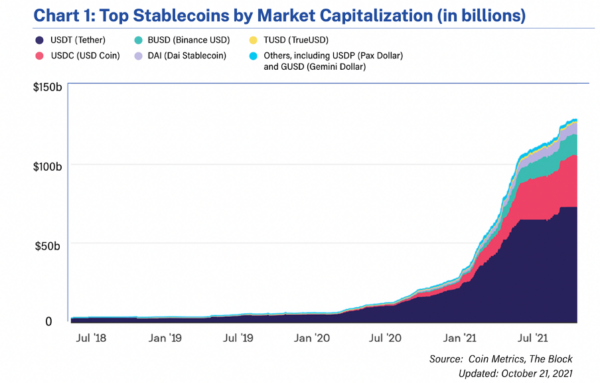 While the use of stablecoins certainly has grown exponentially over the past year, its scale has not yet tipped toward mainstream adoption by merchants and consumers such that a majority of policymakers have aligned on whether and how to regulate stablecoins. Such increase in scale of adoption would impact whether and how risks stemming from stablecoin activities grow unaddressed by existing regulations prompting the need for new rules.

The complexity of regulating a “DeFiDecentralized Finance (DeFi) removes financial institutions ... More” system
The question then becomes what rules would be appropriate and most effective in addressing the risks of stablecoin activities. As Prof. Hilary Allen testified, decentralized finance activities or “DeFi” present inherent challenges to existing regulatory approaches because there lacks a single or identifiable individual or entity to hold accountable for things like issuing a stablecoin, operating the blockchainA blockchain—the technology underlying bitcoin and other c... More digital ledger and performing consensusConsensus is a mechanism, usually used by most nodes on the ... More which must be reached by the majority of users to make changes. Since this system is “emerging,” it’s difficult to regulate it in its current form, especially when compared to more traditional banking functions like “deposits” and withdrawals.

While there are regulatory concerns regarding a system that is still evolving, the future US regulation of stablecoins could present the same benefits as the regulation of the existing financial system. Those benefits would include “consumer protection, systemic stability, safety and soundness, and combating illicit finance,” according to Jai Massari, Partner, Davis Polk & Wardwell, LLP.

To regulate or not to regulate, that is the question

It’s possible that a new and well-designed federal charter could accommodate a “business model premised on the issuance of stablecoins fully backed by short-term, liquid assets and the provision of related payments services.” However, this will take time to develop. It will also take time for legislators to develop an approach that suits both state and federal authority to regulate “Harmonizing a broad U.S. approach to digital assets and competition in the digital currency space race, can improve U.S. competitiveness, security and lower fundamental costs for basic financial access,” noted Dante Disparte, Chief Strategy Officer and Head of Global Policy, Circle

Since the technology is relatively immature, you can expect there will be more hearings and investigations on the monitoring of stablecoins and how to best ensure compliance with existing (or new) laws. For now, the real groundbreaking moment is how the Senate’s approach has evolved from a presumptively hostile stance toward crypto to seeking thoughtful dialogue on stablecoin regulation in an attempt to provide an “innovative array of secure banking and payment options” that includes digital assets.