On July 31, three individuals were charged for their alleged roles in the July 15 Twitter hack— Mason Sheppard, aka “Chaewon,” 19, from the United Kingdom; Nima Fazeli, aka “Rolex,” 22, from Florida; and a juvenile whose identity is sealed.

A large contributor to this speed is blockchain

A blockchain—the technology underlying bitcoin and other c... More analytics. By attempting to cash out at regulated exchanges, blockchain analysis tools like CipherTrace Inspector were able to assist investigators in determining which accounts at which exchanges belonged to the hackers. Investigators were then able to subpoenas these exchanges for the know-your-customer (KYC) data associated with the accounts—such as ID, birthday and address—revealing their true identities.

An overview of the Twitter hacker’s flow of funds as of 7/21/2020, highlighting the exchanges, P2P marketplaces, gambling sites, and mixing services the funds have passed through

Over the weekend, the twitter hacker continued to move funds to exchanges, peer-to-peer marketplaces, mixing services, and gambling sites in an attempt to cash out and further obfuscate funds. CipherTrace will continue to monitor the situation and update the effected entities that have received scammed funds.

The Twitter hacker moved funds to a crypto casino

CipherTrace has been following the flow of Bitcoin

Bitcoin is a digital currency (also called crypto-currency) ... More from the Twitter Hack and the corresponding Bitcoin scam that unfolded earlier this week. So far, there have been 11 outbound transactions from the scammer’s wallets. Theses transactions are listed below:

Ten of the outbound transactions have consolidated into new addresses, as seen in figure 1 below, which gives a full overview of the scammers laundering pattern. CipherTrace has also identified specific examples of transactions going into regulated exchanges and mixing services. 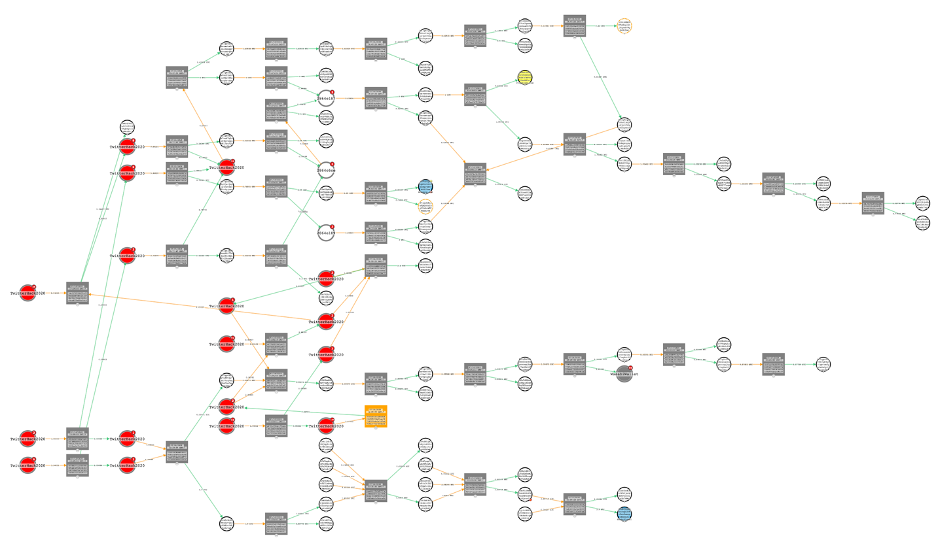 The 11th outbound transaction from the hacker is shown below. This is mostly a consolidation of some of the smaller Bitcoin payments sent after most of the tweets had been removed and the majority of victims had already made deposits into the hacker’s addresses. These smaller amounts were most likely sent by users trying to dust the account in one form or another to monitor the flow of funds or tag the address with crypto-graffiti.

The 11th outbound transaction from the Twitter hacker took place July 16 at 4:25 PST.

So far, the majority of Bitcoin sits in unattributed addresses, which are most likely private wallets. However, CipherTrace has traced portions of the Bitcoin into exchanges and other wallet services, specifically those with privacy-enhanced features. The first movement into an attributed entity was to Binance via TX aad68b2a47c20f9bce6f8f846ae640453f1f8badbe16c96f5c6077e48e292903. CipherTrace believes this address to be an old Binance cold wallet, which hasn’t sent a transaction out since November 2018. CipherTrace believes that this transaction was not made to cash out funds, but rather to troll.

Additionally, there was a movement of Bitcoin into a Singapore-based cryptocurrency exchangeA business that allows customers to trade cryptocurrencies o... More via TX c0600d91c4ce931800e49b9dae54b6597a910092b3d4999244f5cc611c3ef0ae. It should be noted that prior to entering this exchange, the Bitcoin was commingled with multiple other UTXOs that did not originate from the scam. Additionally, 1 hop prior to the deposit into this exchange, the Bitcoin passed through address 1Bn9LVWBW9xhKH1dFA9uWMM46RTc5Qror5, which has nearly 10,000 transactions. CipherTrace could not with certainty determine what entity or individual that this address belongs to, however, it sent Bitcoin originating from the theft into the Singapore-based exchange. At a minimum, 1.08945 BTC originating from the theft entered the 1Bn9LVWBW9xhKH1dFA9uWMM46RTc5Qror5—roughly 8.5% of the scammed funds.

The hacker moved funds into a Singapore-based exchange

CipherTrace has notified the exchange in question of the deposited funds.

Yesterday, July 16, at 8:39 PM PST, there was a deposit of 2.89 Bitcoin (roughly 22.5% of the scammed funds) into Wasabi wallet that directly originated from the theft. Wasabi is a non-custodial, open-source wallet that utilizes CoinJoins for enhanced privacy. Mixing through a Wasabi wallet will begin when an hour has elapsed in queue, or 100 users have signed up for the round. While the wallet sets a target of roughly 12 hours for it to be on the blockchain, users can adjust the mining fee to attract a quicker confirmation. All Wasabi traffic is tunneled through TOR—the same encrypted network used to access the dark web.

Today, July 17, at 1:15 PM PST, the hacker moved 0.1022 BTC into ChipMixer. ChipMixer acts as a tool for users to obfuscate their funds by either splitting, merging, betting, or withdrawing “chips”—pre-funded tokens in the sum of the value of the originally deposited funds.

Through proprietary clustering algorithms, CipherTrace is easily able to identify these mixing services.

The hacker deposited funds directly linked to the hack into ChipMixer