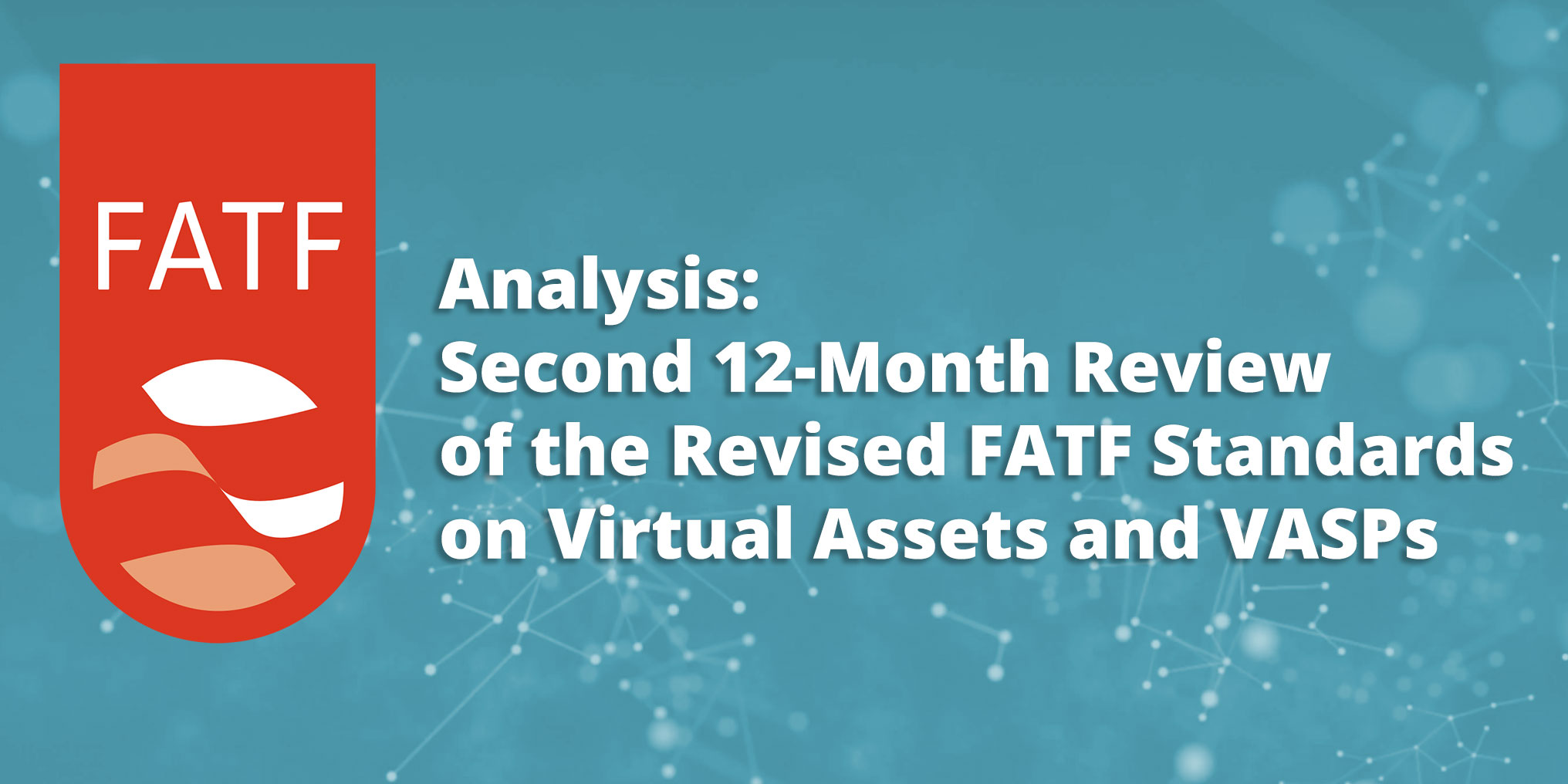 While the second 12-month review reveals progress has been made in the implementation of the Revised FATF Standards, after two years many jurisdictions still do not have the basic regulatory framework for VASPs. The FATF covers more than 200 countries and jurisdictions, however, less than half (45%) of the 128 reporting jurisdictions reported that they have passed the necessary laws/regulations to permit or prohibit VASPs.

The number of jurisdictions whose AML/CFT regime for VASPs is actually operational is even lower. Most jurisdictions and most VASPs are not complying with the travel rule with only 10 jurisdictions reporting that they have implemented and are enforcing Travel Rule requirements for VASPs.

It is assumed that the majority of jurisdictions that did not provide a response to the FATF in this report have made even less progress in the implementation of the Revised FATF Standards.

Since FATF’s first 12-Month Review, there has been significant progress in Travel Rule technology development. Several standards and protocols—such as the Travel Rule Information Sharing Architecture (TRISA)—can now help enable interoperability between solutions and, when enhanced by blockchainA blockchain—the technology underlying bitcoin and other c... More analysis tools such as in CipherTrace Traveler, can also safely identify VASPs to exchange Travel Rule data.

The lack of Travel Rule implementation globally is a major obstacle to effective global AML/CFT mitigation and undermines the effectiveness and impact of the revised FATF Standards. For this, the FATF has indicated that one of its major next steps will be to accelerate the implementation of the Travel Rule globally.

How Jurisdictions Have Implemented the Revised FATF Standards

Only 35 of the 58 jurisdictions that claimed to now regulate or prohibit VASPs reported that their regime was currently operational.

For jurisdictions that have yet to prohibit or regulate VASPs, 26 jurisdictions reported that they were in the process of passing the necessary legislation in order to regulate or prohibit VASPs; 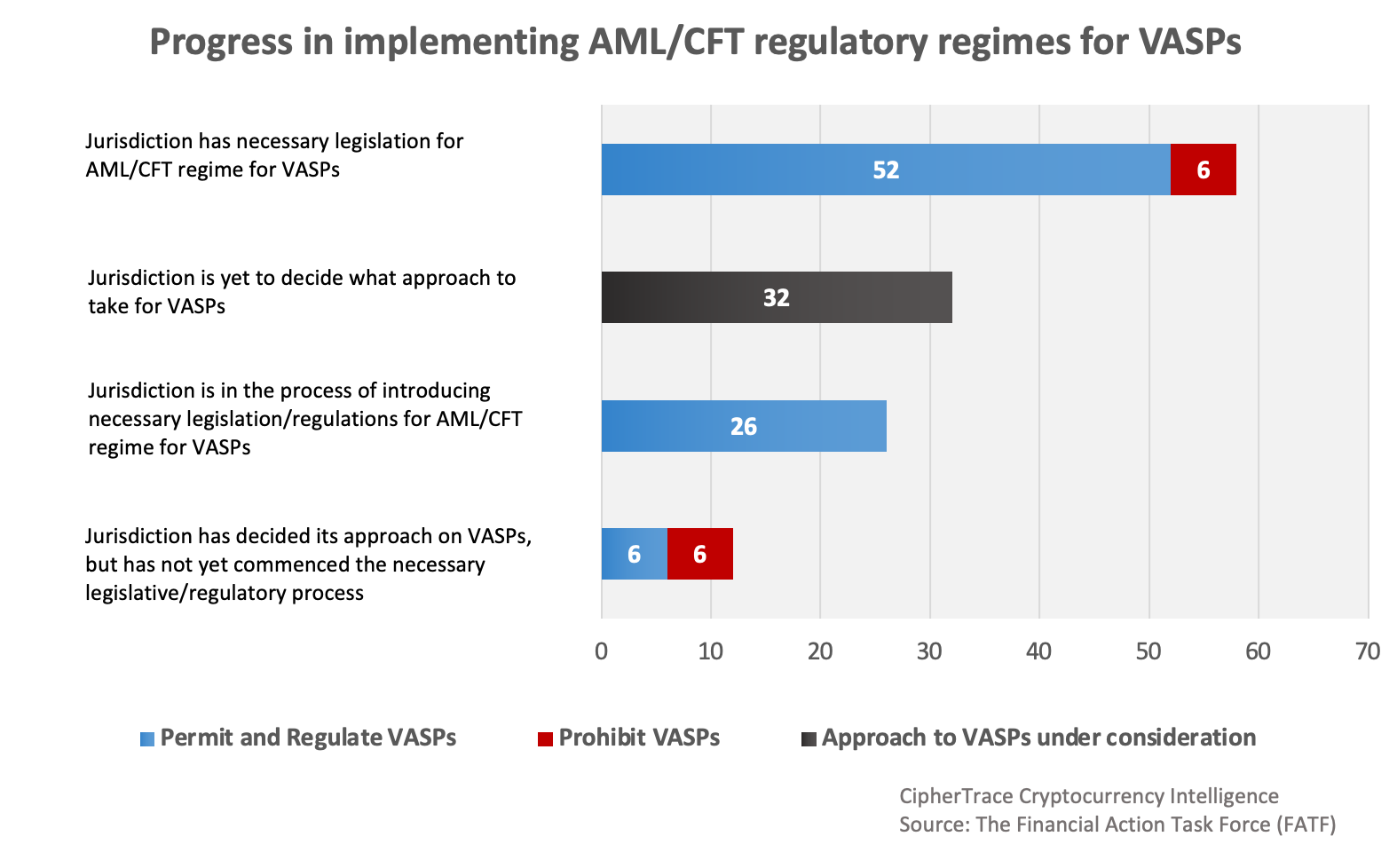 In the FATF Report, 36 jurisdictions provided Suspicious Transaction Report (STR)A Suspicious Transaction Report (STR) is a document that fin... More data from VASPs. According to these 36 jurisdictions, VASPs had filed 146,704 STRs between 2019 and 2020. Some jurisdictions noted that they had noted an increasing number of STRs in 2020 as more VASPs entered the market, knowledge of AML/CFT grew in the sector, and VASPs developed their reporting systems. Of the 146,704 STRs reported, 55,118 were from 2019 and 91,586 were from 2020.

The inconsistency of results from blockchain analytics companies is indicative of inconsistent definitions, double counting and data quality issues.

All jurisdictions need to implement the revised FATF Standards, including Travel Rule requirements, as quickly as possible. The FATF will undertake the following actions focused on virtual assets and VASPs. According to the Second 12-Month Review, the FATF’s next steps will be to: