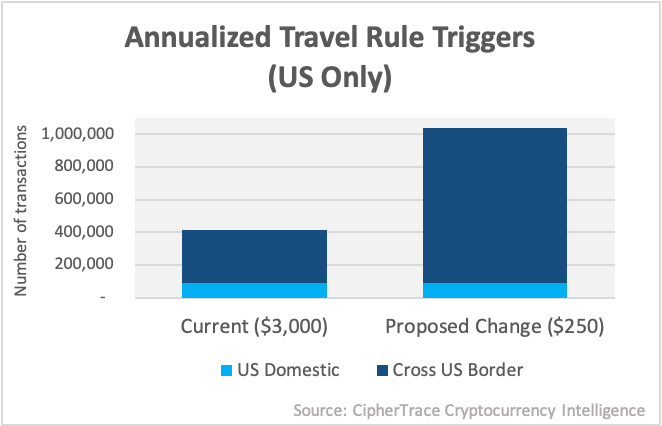 On October 23, the Financial Crimes Enforcement Network (FinCEN) and the Federal Reserve Board proposed a rule change that would amend the recordkeeping and travel rule regulations under the Bank Secrecy Act. The proposal would require financial institutions, including banks and cryptocurrency exchanges, to collect and store transfer information on international payments at a much lower threshold.

Currently, financial intuitions must store and forward records for transfers of funds abroad in excess of $3000. The new rule would see much smaller transfers—anything over $250—come under the same requirements. Notably, the rule specifically includes cryptocurrency transfers as a class of transactions to which the proposal would apply. 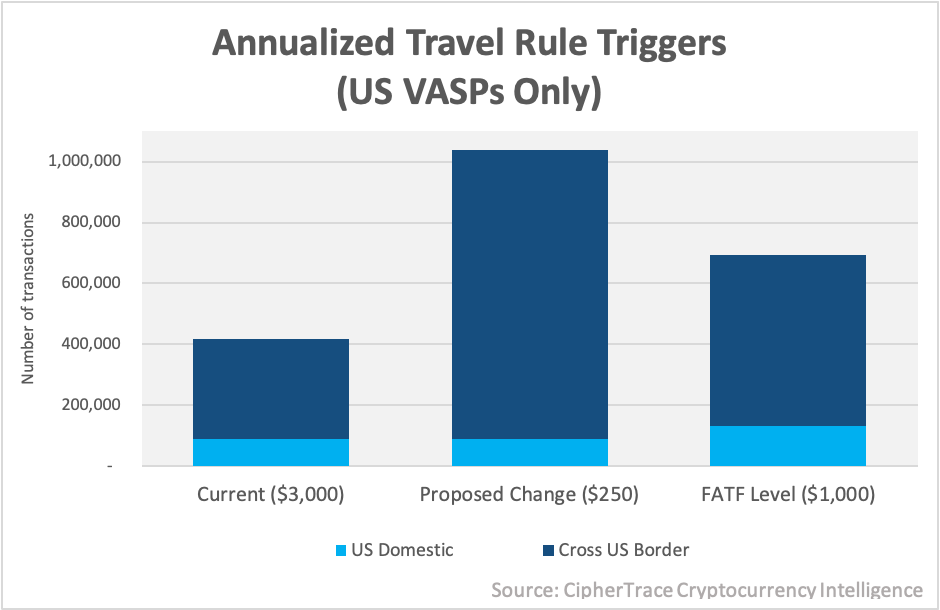 Decreasing the threshold to collect, retain, and transmit information on the transmittals of funds that “begin or end outside the United States” would increase the number of transactions that trigger Travel Rule thresholds every year by a factor of at least 2.5, according to CipherTrace analysis.

According to CipherTrace data, to comply with the current US Travel Rule threshold of $3,000, US VASPs would have had to have sent over 34,000 messages during the month of October. Over 27,000 of these messages—around 78%—would have been cross-border in nature, meaning the sending or receiving VASP was domiciled outside of the United States. This would translate to over 417,000 messages a year at the current threshold.

Lowering the threshold to $250 would push the amount of required travel rule messages to be shared and stored per year to over one million. At this lower threshold, cross-border transactions make up 83% of all travel rule triggers for US VASPs.

If the US were only to lower its threshold to FATF’s de minimus standard of $1,000, then the amount of transactions that would trigger compliance would only increase by a factor of 1.7 every year.

Intermediary banks or financial institutions are also required to transmit this information to other banks or nonbank financial institutions in the payment chain. The proposed rule change acknowledges that cryptocurrency can be transferred without third-party bank involvement but states that, in reality, many users rely on hosted wallets and exchanges to transact.

Difficulty in determining “cross-border payments” in the virtual asset world

Due to the cross-border nature and global reach of virtual assets and VASPs, compliance with this definition would be difficult to enforce, especially given many VASPs are often registered in multiple jurisdictions around the world. A financial institution would only have “reason to know” that a transaction begins or ends outside the United States to the extent that such information was shared when receiving the transmittal order or collected from the transmittor—assuming he or she even knows the true extent of the cross-border nature of their transaction.

It is for this reason that the FATF decided in its virtual asset guidance that “countries should treat all VA transfers as cross-border wire transfers, in accordance with the Interpretative Note to Recommendation 16 (INR. 16), rather than domestic wire transfers, based on the cross-border nature of VA activities and VASP operations.”

Until recently, regulators have taken a gentle approach to travel rule enforcement. With this proposed rule change, FinCEN has signaled that it takes cryptocurrency seriously and that the same AML rules that apply to fiat currency will be applied to cryptocurrency moving forward. FinCEN welcomes comments on the proposed change on or before November 23, 2020.

The full proposal can be read here: https://www.federalreserve.gov/newsevents/pressreleases/files/bcreg20201023a.pdf