skip to Main Content
Home » anti-money laundering » Criminal Bitcoin — How Deep is The Dark Side of the Most Widely Traded Cryptocurrency?

Criminal Bitcoin — How Deep is The Dark Side of the Most Widely Traded Cryptocurrency?

A blockchain—the technology underlying bitcoin and other c... More technologies are sparking innovation in financial technology (FinTech), but they do have a dark side. Criminals can use bitcoin for illegal activities and attempt to hide their ill-gotten gains, hoping law enforcement will not track the funds through the bitcoin transaction chain. They also steal huge quantities of cryptocurrency—nearly US$1 billion, according to a recently released report by CipherTrace. And in both cases, they try to circumvent today’s growing cryptocurrency

A cryptocurrency (or crypto currency) is a digital asset des... More Anti-Money Laundering (AML) laws and convert these tainted blockchain funds into clean and spendable money.

Proof positive that cryptocurrency anti-money laundering laws are having a positive impact
Nonetheless, until now there has been no definitive research or blockchain analysis into how extensively the most widely traded cryptocurrency is associated with illegal activity and money laundering. New research from CipherTrace recently uncovered proof that criminals not only use large amounts of bitcoin for their illicit activities, but they also send significant amounts of tainted bitcoin to exchanges—especially those in countries where cryptocurrency AML regulations are lax or lacking. In fact, analysis of the data reveals that the top exchanges have laundered US$2.5 billion worth of bitcoin at today’s prices.

This research was detailed in the 2018 Q3 Cryptocurrency Anti-Money Laundering Report, which CipherTrace published on October 10, 2018. The report covers the methods and results of what is perhaps the most exhaustive investigation into criminal bitcoin ever conducted. Essentially, this CipherTrace study involved quantitative bitcoin blockchain analysis of all the bitcoin payment transactions on the 20 top cryptocurrency exchanges globally. The results showed two things: 1) There is significant criminal use of bitcoin, and 2) cryptocurrency AML laws are working because 97% of direct bitcoin payment transactions from identifiable criminal sources were received by cryptocurrency exchanges in countries with weak crypto AML regulation. 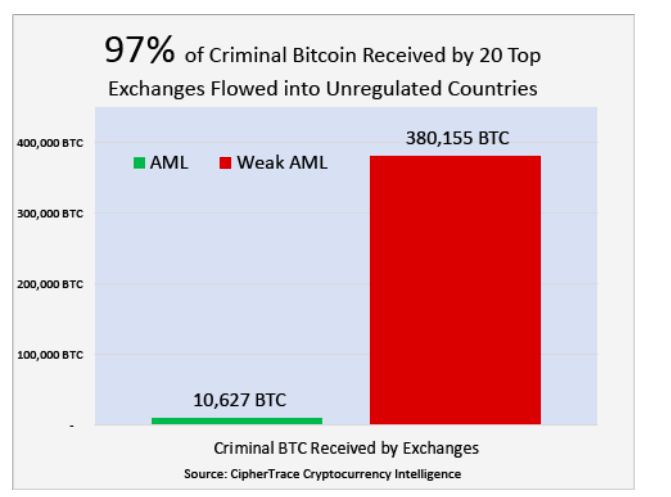 Essentially, the study shows that criminals are flowing large amounts of dirty bitcoin into these poorly regulated exchanges and other services—such as mixers—turning it into “clean” cryptocurrencies. Then, they can move the funds into the global financial payments system with little risk of being detected.

However, for governments and regulators around the globe, the positive impact of well-enforced AML cryptocurrency laws revealed by this study should come as welcome news. First, it has the obvious benefit of reducing illegal and illicit activity in general. Secondly, criminals use these laundered funds to finance illicit activity—such as international drug gangs that use “clean” funds to produce and distribute more illegal substances.

Attracting trustworthy players with secure, ‘safe’ crypto economies
This direct correlation between cryptocurrency AML enforcement and criminal activity is also important information for governments around the globe that are trying to nurture their crypto economies. By making cryptocurrency use in their jurisdictions secure and untarnished by criminal activity, they can create a trustworthy virtual currency financial market to attract equally trustworthy digital asset business (DABs).

The report also covers cryptocurrency AML regulation activity around the globe, and notes several jurisdictions, such as the aspiring blockchain islands of Malta and Bermuda, that are actively following this AML cryptocurrency path. Others, like the US, are working more forcefully to not only reduce money laundering but also protect consumers from fraud and criminal activities through tougher enforcement of crypto AML laws. One example is US FinCEN, which has, among other recent signaled that it is putting renewed scrutiny on crypto-to-crypto services such as mixers. The agency has also set out clear guidelines for exchanges and other DABs and recruited the IRS to help audit “all” cryptocurrency exchanges.